(1854-1933) Parsi priest, scholar, public servant, and community activist. Modi produced scholarly works on a great range of subjects, and he may well have been the most prolific Parsi scholar of modern times. 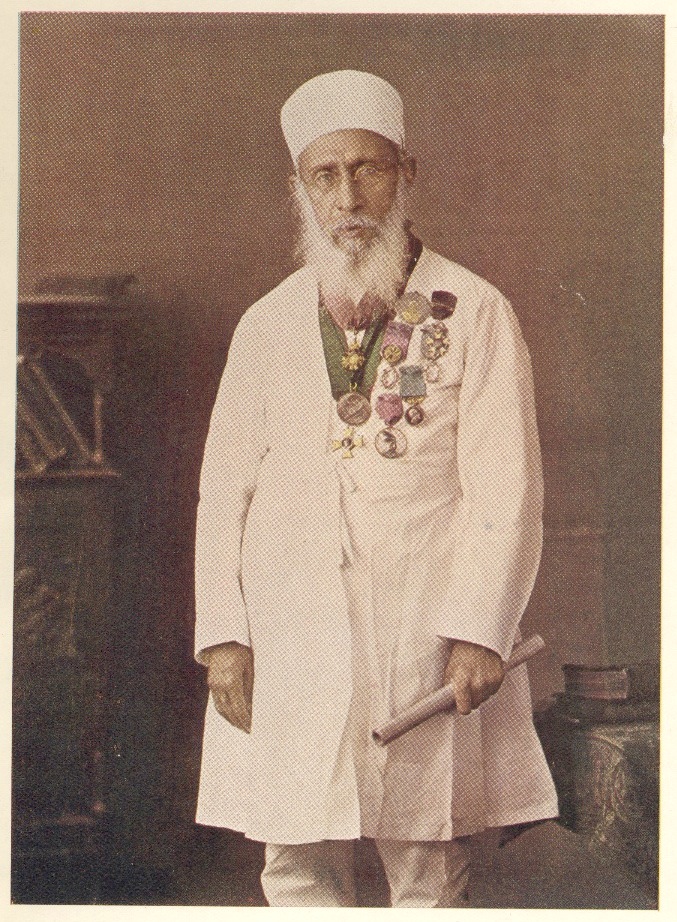 Modi was the only son of a priest who served as the first head priest (Panthaki) of a fire-temple in South Bombay (Seth Jejeebhoy Dadabhoy Agiary, Colaba, consecrated in 1836). At the age of 11, Modi obtained his first-grade initiation into priesthood (navar), and he was married to Aimai Hormusji Saklatwala, by whom he had two sons. After the death of his wife, he married her sister Shirinbai Hormusji Saklatwalla, by whom he had three sons and six daughters. In 1871 he passed matriculation and underwent the second-degree initiation intro priesthood (martab). In the same year, Modi succeeded his father as head-priest of the fire-temple, in which capacity he formally served until 1910.

While he initially showed inclinations towards the natural sciences, the first modern Parsi orientalist, K. R. Cama (on whom he wrote a biography), made him take up Iranian studies. In 1882, Modi joined the Mulla Feroze and Sir Jamsetji Madressas (two Parsi institutions, founded in 1854 and 1863, respectively, for teaching Indo-Iranian languages), and he received a B.A. from Bombay University in 1876. He studied German and French in order to familiarize himself with contemporary Iranian scholarship. He became a Fellow at the Sir J.J. Madresa in 1886 and of Bombay University in 1887. He was elected a member of ṭhe Anthropological Society of Bombay (for which he also came to serve as Secretary and subsequently President) and a member of the Bombay Branch of the Royal Asiatic Society in 1886 and 1888, respectively. Like his mentor Cama, Modi was a dedicated Mason and he published several papers on Masonic quetions (collected as Masonic Papers [1914]).

Modi was elected as Corporator of the Bombay Municipality (1889). He was appointed Justice of Peace (1890) and a delegate of Bombay’s Parsi Chief Matrimonial Court in 1893. The title Shams-ul-Ulama was conferred on him by the British Government in 1893. Shortly afterwards, Modi was appointed secretary of the Bombay Parsi Punchayat (BPP), a post that made him financially independent and that he held until 1930 (when he published a massive history of that institution in Gujarati). Modi was instrumental in having a column erected (in 1917) at Sanjan on the Gujarat coast commemorating the landing of the Parsis on the shores of India.

Among his many academic commitments, mention should be made of his affiliation with the K.R. Cama Oriental Institute, for which he served as President (1919-1921), Secretary (1921-1931), and editor of its journal (1922-1931), making it into an important publication in the field of Iranian studies. Modi obtained several honors and awards, including honorary doctorates from the Universities of Heidelberg (1912) and the University of Bombay (1930) as well as the Knighthood (Knight Bachelor) conferred to him by the British government (1930).

Modi traveled widely, west to the United States and east to Japan. He toured the Indian subcontinent, Asia, and Europe. On some of his travels he attended international conferences such as the 7th International Congress of Orientalists at Stockholm (1889) and, as the sole Zoroastrian, the World's Parliament of Religions at Chicago (1893), where he quoted extensively from Western scholars and presented Zoroastrianism “in direct contrast to Islam, as generative of civilization and progess” (Ringer, p. 100). Modi published a report of his travel to Iran (1925, in Gujarati) and used recollections and anecdotes from his travels in his many speeches.

From 1888 to 1933 Modi delivered over 350 lectures (Giara, p. 10). About 110 of his talks in Gujarati have been published in the seven volumes entitled Jarthoshti dharma sambandhi bhāshano ane vāejo (Talks and sermons pertaining to the Zoroastrian religion, Bombay, 1902-32; translated, abridged, and rearranged by Ramiyar P. Karanjia under the title Wisdom from a Lifetime, Mumbai, 2005). Modi composed some devotional poems (monajat) in Gujarati and translated parts of the Šāh-nāma into Gujarati, in prose as well as in verse form.

Modi produced a vast amount of scholarly works dealing with an enormous range of different subjects, and he may well have been the most prolific Parsi scholar of modern times. (For a preliminary bibliography, see Giara, pp. 61-81.) His more than 40 books in Gujarati deal with topics such as ancient Iran, Avestan and Middle Persian philology (including a dictionary of Avestan proper names and translations with notes of several Pahlavi texts), Zoroastrianism and its history, comparative religions, travelogues, natural history, and meteorology. He published several volumes of collected papers.

Among the wide range of subjects discussed in his books in English, some are in the field of Middle Persian philology, such as his editions of the Mādayān ī hazār dādestān (as Mâdigân-i-Hazâr Dâdîstân, Poona, 1901) and the Jāmāspi (see AYĀDGĀR Ī JĀMĀSPĪG; in Jāmāspī, Pahlavi, Pazend and Persian Texts with … English and Gujarati Translation, Bombay, 1903); several deal with Parsi and Iranian history, games, the influence of Iran on other cultures, and some outline Zoroastrianism and Zoroastrian rituals.

His generally best-known work is The Religious Ceremonies and Customs of the Parsees (1922; 2nd ed., 1937, and several reprints) which resulted from his collaboration with The Encyclopaedia of Religion and Ethics (ed. J. Hastings). Although flawed by minor inaccuracies (to be explained by the fact that Modi did not work as a priest practicing the more intricate, ‘inner’ liturgies), a questionable comparative approach, and problematic interpretations (favoring hygienics), the book still remains the only comprehensive survey in English of all rituals performed by the Parsis.

Modi produced far more than 100 scholarly articles, several of them book-length. A good number of these are compiled into collections of papers (Asiatic Papers I-IV [1905-1929]; Anthropological Papers I-IV [1911-1928]; Dante Papers [1914]; Memorial Papers [1922]; Cama Oriental Institute Papers [1928]; Oriental Conference Papers [1932]). Especially interesting are his substantive contributions on elements of popular religious culture, such as charms, amulets, oaths, songs, and the like. Modi’s historical works (some of them occasioned by matters of community dispute) remain extremely valuable, since Modi published a good number of original source materials.

Apart from his scholarly writings, Modi produced many uplifting, moralistic, and theological/religious publications, especially in Gujarati. In 1911 he also published A Catechism of the Zoroastrian Religion, an early (and often reprinted) English catechism (originally published in Gujarati in 1907), where he provides a demythologized (Hinnells, p. 262), non-dualistic, moralizing (Stausberg, p. 107), rationalist, deistic, and universalizing (Ringer, pp. 117f.) interpretation of Zoroastrianism. He argues that Zoroastrianism is unique with respect to other religions, insofar as it does not stipulate the figure of a savior; every individual was his own savior, based on one's accumulated merits (1911, p. 15).

In the struggle between so-called reformists and so-called orthodox, Modi “took a moderate position, advocating cautious change” (Ringer, p. 134). In the famous Parsi Panchayat Case (1906-8), Modi served as expert witness, but involved himself in several contradictions, reflecting the ambivalence of his position: while supporting conversion from a religious point of view, from a social point of view he was relucant to open the doors to potential lower-caste opportunists (Sharafi, 2007, pp. 165-69).

Mitra Sharafi, “Judging Conversion to Zoroastrianism: Behind the Scenes of the Parsi Panchayat Case” (1908), in John R. Hinnells and Alan Williams eds., Parsis in India and the Diaspora, London, New York, 2007, pp. 159-80.