NAZIF, SÜLEYMAN (Solaymān Naẓif; b. Diyarbakır, 1870; d. Istanbul, 4 January 1927), Ottoman writer, poet, and high-ranking civil servant (Figure 1). He is noted for his writings on the Babis (Bahais) in Iran and the Ottoman Empire and on the influence of Persian literature on Ottoman literature. 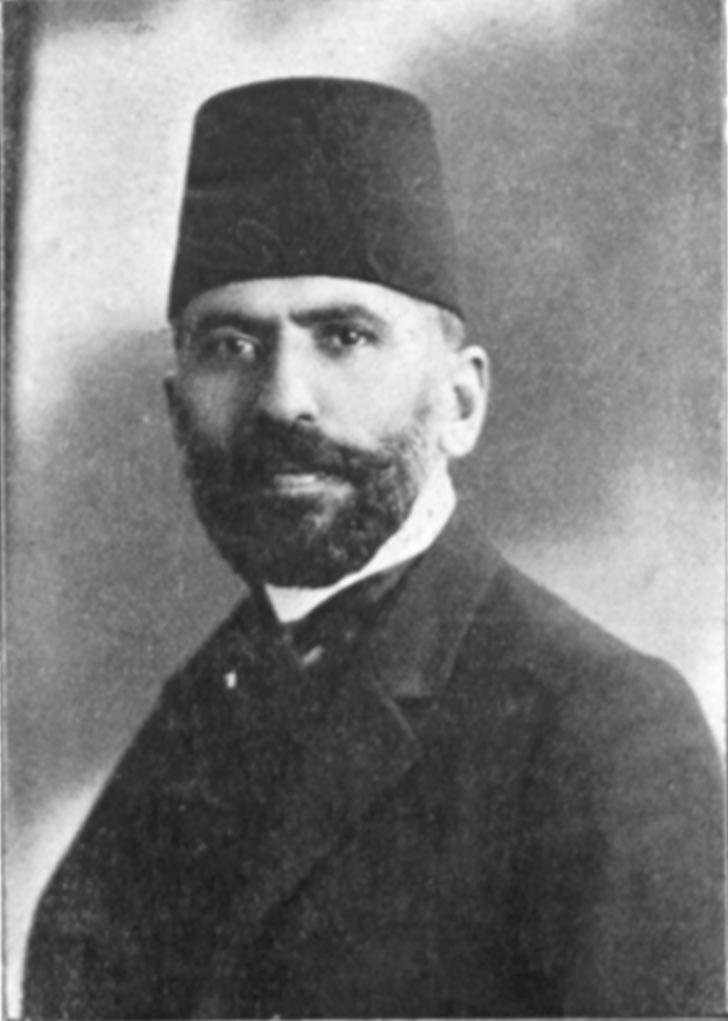 Nazif was son of the poet and historian Saʿid Pasha. He mastered Arabic, Persian, and French and worked for several government posts in different provinces during the reign of Sultan Abdülhamid II (ʿAbd-al-Ḥamid II) and the Young Turk period. In 1896, he began publishing works critical of Abdülhamid. He fled to Paris a year later, where he wrote in favor of a constitutional government, supporting the Young Turk movement. After returning from Europe, Abdülhamid gave him a post as chief secretary of a ministry in Bursa (1897-1908); at the same time, he was effectively in exile from the capital because of his political publications in Paris. Nazif returned to Istanbul in 1908 after the Young Turk Revolution and later held the office of governor general (wāli) of Basra, Kastamonu, Trabzon, Mosul, and Baghdad for short periods (1909-1914). He was an outspoken and fervent nationalist who wrote an extensive number of anti-imperialist articles for newspapers, his most famous being “Kara Bir Gün” (A dark day) that he published in February 1919 when Istanbul was being occupied by the Allied Powers after World War I (Ayvazoğlu, pp. 55-58). As a result of a speech in January 1920 in favor of the French Turkophile Pierre Loti (1850-1923), he was banished to Malta. Nazif stayed there for twenty months with more than a hundred other Turkish enemies of Britain. He returned to Istanbul in October 1921, where he made a living by publishing articles and books until his death. Mention must also be made of another work that caused much uproar in and outside Turkey; his “Hazret-i İsa’ya Açık Mektup” (An Open Letter to Jesus; Nazif 1924; in romanized script, Aday, 2006), in which he attacked the imperialist “Crusader” attitude of Europe. It was a criticism of European policies, which were anything but Christian in spirit, towards a defeated Turkey (Ayvazoğlu, pp. 52-55; Alkan, 2008b). Nazif, who was also famous for his ready wit and incisive humour, died in poverty, suffering from pneumonia. He was buried in the Edirnekapı cemetery in Istanbul.

Whereas there is ample literature in German and Turkish about his life and work (Hartmann, pp. 42-47; Gövsa; Kurgan; Beysanoğlu; Karakaş; İnal, III, pp. 1523-48; Göçgün), current information in English is limited (Alkan, 2008b; Wasti).

Nazif wrote approximately 25 books and published numerous articles on history, politics, and literature that he sometimes signed as “İbrahim Cehdi” (his great-grandfather’s name). Among these are a series of fifteen articles titled “İran Edebiyatının Edebiyatımıza Tesiri” (The Influence of Iranian Literature on our Literature), published in 1918 in the periodical Edebiyat-ı Umumiye Mecmu’ası (see Bibliography; in romanized script, Yıldız, 2004), and his book Nasıruddin Şah ve Babiler (Nāṣir-al-Din Shāh and the Babis, 1923; in romanized script, Çınar, 2014).

The Ottoman Empire in the late 19th century was the stage for cultural debates between followers of Westernism, Turkism/Turanism, Ottomanism, and Islamism. These were movements of thought which attempted to change a static Islamic society into a dynamic one and searched for a new identity and order. They can be regarded as different projects in the history of modernization in the late Ottoman Empire. Nazif was a Turkish nationalist but also a critic of Turkist conceptions of history that either reduced or rejected the Persian influence on Turkish literature, the counter-arguments to which his “İran Edebiyatının Edebiyatımıza Tesiri” articles were meant to provide. In 1918, Nazif held a conference in Istanbul on the Persian impact as a direct response to the Turkists. Nazif, who was famous for his “sharp and serrated pen” (Abdullah Cevdet, in İnal, III, p. 1533; quoted in Wasti, p. 498), caused a far-reaching discussion with this conference. He later published the series of talks he gave at the conference as “İran Edebiyatının Edebiyatımıza Tesiri.” It was soon followed by a conference, organized by the famous Turkish historian and politician Mehmed Fuad Köprülü (1888-1960), a proponent of Turkism that instead highlighted the Turkish influence on Persian literature (Vejdani, pp. 55-60).

A prominent eye-witness to those debates was the Iranian poet ʿĀref Qazvini (Matini and Caton). During his years in Istanbul and afterwards, he got into a literary fight with some Ottoman writers and intellectuals and wrote poems against the Ottoman Empire. The most important of these poems was his poem “Solaymān Naẓif,” in which Qazvini wrote in response to Nazif. In fact, this is a kind of debate between the Pan-Turkist and Pan-Iranist ideologies. Both Nazif and Qazvini expressed their ideas and thoughts with the help of literature by taking an attitude according to the social and political developments of the period; they used a harsh and impolite language to offend the other side (Başcı).

In his “İran Edebiyatının Edebiyatımıza Tesiri,” Nazif states at the beginning that his article is the result of his feelings and what had remained in his memory over the years, rather than scholarly research (Nazif, 1918, p. 385). He claims that “the literature of the Turks, and even their history, started with the Ottomans,” even though one might accuse him of “lack of knowledge and perception.” He argued that since Turkish dynasties such as the Ghaznavids and the Seljuks spoke, wrote, and ruled in Persian and/or Arabic, they cannot be regarded as part of Turkish history. In the same way, the Qajar dynasty was an Iranian one, even though it was of Turkic origin (Nazif, 1918, p. 402).

As to why and how the Turks emulated Persian literature, Nazif says that they had always dwelled in the regions around Iran. Through this interaction Persian and Persianized Arabic words entered the Turkish language, and Persian and Turkish grammar resembled each other and got closer. And because Iranian literature and civilization was much more advanced than Turkish culture, “we became guests in the caravanserai of Iran as soon as we dismounted the horse.” For Nazif, the interaction was so extensive that a Turk who knew his own language well could learn the rules of the Persian language and master the literature with some effort after just a few months of study (Nazif, 1918, p. 606).

Nazif also believed that Persian literature had a major negative effect on the Turks; that is, from the time that Turks learned to live in the “manner of a dervish” (dervişlik), it was something that “gnawed the soul.” This the Turks had acquired from India via Iran, under the name of “dying in God.” They were following a path that God disliked; it started out as “resignation,” settled in as “lethargy,” and finally became “a soul-killing morbid state of mind.” He said that even “our most shrewd poets could not escape from its malignant effect” (Nazif, 1918, p. 792).

Nazif’s stance can be criticized for two reasons: First, because his approach is not academic but based on personal convictions; and second, because there is no room left for the originality of Turkish thought and literature. In other words, Nazif failed to study works in the Turkish language that had not been influenced by Persian, and he lacked historical knowledge. He wrote his article at a time when there was little or no access to Arabic and Persian sources about the subject (Karaismailoğlu, p. 81). However, these criticisms are not far removed from the ones Köprülü and his followers directed at Nazif a century ago. It needs to be stressed that Nazif’s work was an attempt to articulate an inclusive understanding of what constituted “Turkish” literature in a period of increasing nationalism, preoccupied with exclusivist and romantic notions of origins and originality (for an extensive discussion of the Turkism debates, see Ayvazoğlu pp. 121-68).

In Nasıruddin Şah ve Babiler, Solaymān Nazif places the development of the Babi and Bahai religions (see BABISM and BAHAISM) in the context of Iranian and Ottoman history. Throughout his book, Nazif speaks negatively about Nāṣir-al-Din Shāh and states that the escalation of uprisings, destruction, the killing and plundering of people, and the obstruction of progress and independence in Iran characterized his reign (Nazif, 1923, p. 16).

A special concern of Nazif’s book is his admiration of the Babi disciple Ṭāhera Qorrat-al-ʿAyn (Fātema Ḵanom Baraḡāni Qazvini; d. 1852). He praises her personality, her beauty, and her virtues with magnificent words intended to perpetuate her memory (Nazif, 1923, pp. 35, 44-49).

A main focus of Nasıruddin Şah ve Babiler is the Bahai leader ʿAbd-al-Bahāʾ ʿAbbās Effendi (q.v.; 1844-1921), whom Nazif had met in Haifa in 1917. Nazif states that ʿAbd-al-Bahāʾ had renounced Babism and established the Bahai tarikat (ṭariqat)after he had moved from Akka to Haifa following the Young Turk Revolution. He moreover relates that ʿAbd-al-Bahāʾ was acquainted with the famous Ottoman poet Ziya (Żiā) Pasha, who had supposedly laid the foundations for the contacts between the Young Ottomans and the Babis and had communicated with him and Namık Kemal (Nāmiq Kamāl), another reform-minded figure among the Ottoman literati of the Tanẓimāt (“reform”) era, who was exiled to Cyprus. The Bahai leader had also told Nazif that he had an extensive correspondence with Namık Kemal, but that out of worry over investigation and persecution in the time of Abdülhamid, he had burnt those letters (Nazif, 1923, pp. 52-53; Alkan, 2008a, pp. 100-103).

In a letter written to Nazif in Turkish and appended to his book (Nazif, 1923, p. 91), ʿAbd-al-Bahāʾ complains about some articles about him that had been published in the newspaper Tasvir-i Efkâr (Taṣwir-e afkār) from 5 to 28 January 1920. He says that Nazif received his information about the Babi-Bahai religions from Westerners, who in turn took it from certain persons in Istanbul who outwardly appeared to be Babis. Nazif, ʿAbd-al-Bahāʾ states, who was a lover of truth and had studied the writings of Bahāʾ-Allāh (q.v.; 1817-92), should free himself from various kinds of prejudices. Nazif assures the reader that he wrote down what he read about ʿAbd-al-Bahāʾ and had witnessed himself without alteration, and that, after studying the letter and the newspapers ʿAbd-al-Bahāʾ had sent to him, it was not his place to write in favor of or against ʿAbd-al-Bahāʾ or the Bahai tarikat.

Although Solaymān Nazif’s work had some factual errors, it can be regarded as an important primary source with regard to first-hand information that was not accessible before to Western readers. Like other Ottoman sources from the 1910s and 1920s on the Babi and Bahai religions, Nazif’s book was also unbiased, something that modern Turkish “academic” literature about the Babis and Bahais fails to achieve, since such works are mostly written by students of Islamic theology. The use of the word tarikat by ʿAbd-al-Bahāʾ for the Bahai faith, as recorded by Nazif and the Bahai leader himself, shows that the religion was not presented as a new religion but as part of and congruent with Islam, in accordance with the Bahai principle of the unity of religions, in order to avoid persecution by the Ottomans (Alkan, 2008a, pp. 221-22; idem, 2011).

Necati Alkan, Dissent and Heterodoxy in the Late Ottoman Empire: Reformers, Babis and Baha’is, Istanbul, 2008a.